(Ambrosio’s note:  Your due diligence will not be complete without reaching out to several current franchisees to find out what they really think of the franchise opportunity.  If you’re lucky, you might even elicit a tip or two on how to run a successful operation.  Well this is our lucky day!  Jeremiah Sizemore has given one of my most memorable interviews to date, loaded with practical advice that you can apply to your own franchise journey, whether or not you’re interested in the frozen yogurt business.  Here’s to you, Jeremiah!)

Jeremiah and his two friends, Evan and Bryce, have been friends since high school and always talked about eventually starting a business together. By 2010, Jeremiah had worked overseas in Logistics and spent time as a small business consultant.  Evan was working as an Electrical Engineer and a DJ, while Bryce was traveling with an IT Consulting firm.

It has been a roller-coaster ride since then, but Jeremiah, Evan and Bryce are thankful for the opportunity to work in an industry they enjoy with people they love.

Franchise Chatter (FC):  Can you share with us the story behind your decision to open an Orange Leaf Frozen Yogurt store?  What other franchise concepts and brands did you consider? What made you choose Orange Leaf over all the other franchise opportunities available?

Jeremiah Sizemore (JS):  We initially became interested in the Pinkberry brand years ago and even considered trying to take that concept to Orlando (I’m sure that business plan is deep in my email somewhere).  In 2008, we visited Yogurtland for the first time and were really impressed by the next iteration of the yogurt concept.  It seemed more accessible than Pinkberry/Red Mango, and I thought it could do well away from the coasts.

Fortunately, in the fall of 2009, a self-serve concept opened down the street from us in Birmingham, AL (where we lived at the time) and we had the luxury of watching their growth in a similar market.


The next year, as we moved back to Kentucky, we got really serious about the concept and started talking to two high school friends about quitting their jobs and working on the project.  We spent some time combing through the different brands and opportunities (there have to be over 100 by now…although we ruled out about 90 of them based on their names alone) and we were most impressed by Orange Leaf.

Their product is the best for most markets and their fees were also lower than the other national chains.  We also appreciated that they were fairly new and would give us some flexibility in running our stores and allow us to tailor marketing to fit with our local markets (this was especially important since none of the self-serve brands had any name recognition in our market).

FC:  How did you go about selecting the location for your store?  What are some of the things one should look for when choosing a location for a frozen yogurt shop?

JS:  Because we had all lived in Lexington for years, we were able to immediately rule out 90% of the retail spots around town.  That is a huge advantage to knowing your local market really well.

With the remaining locations, it was a matter of avoiding exclusives and finding the right size with the potential for outdoor seating.

When we refer to “exclusives”, we are talking about the practice of many shopping centers to restrict the number of similar stores in their shopping center.  For instance, if there is a pizza place, the landlord may include in the lease a promise not to allow any other pizza places in that shopping center.

Actually, our #1 location ended up having an “exclusive” from an ice cream shop in a different part of the center that blocked us.

In addition to those issues, we are also firm believers in the importance of adequate parking and easy access.

FC:  How long did it take you to open your store from the time you signed the franchise agreement?  What were the most time 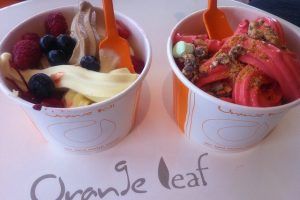 consuming parts of the pre-opening process?

Our experience has been that the lease details can sometimes take longer than the construction phase, especially if the landlord has to perform any improvements.  A lot also depends on having a good contractor (and we certainly do).

FC:  What is your day-to-day involvement in the operations of your stores?  Do you expect this to change as your stores mature?

JS:  Early on, we were in the stores 24/7, but as we began to add more stores, we started hiring full-time managers to look over the operations within the store.

Our entire founding team is still involved full-time, although most of our time is now spent working to open new stores, marketing the current and future locations, and hiring the right people to help us run those stores.

If we had stayed with just one store, we probably would have only a small amount of day-to-day involvement, but the increased scale of our operations leave plenty of work for all of us.

FC:  Do you have any tips for recruiting the right staff, and scheduling them efficiently?

JS:  We opened our first store in our hometown, so we had a built-in network that we tapped into for our staff.

In markets we are less familiar with, a lot hinges on that first local hire that can help expand your visibility from the beginning.  If you want to hire really good staff, don’t expect it to be easy. 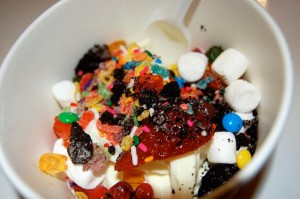 FC:  How do you drum up business for your Orange Leaf Frozen Yogurt store during the colder months of the year?

JS:  From Day 1, we’ve had a full-time marketing team that has really focused on making relationships throughout the community.  We also do a lot of charity events that can help bring in different groups throughout the week.

Our first winter was great since the concept was new and exciting, but keeping customers coming in during that second and third winter will be a huge challenge.  We are still focused on making our stores a comfortable and enjoyable environment.  Even in the winter, people are looking for a place to gather, and we hope Orange Leaf can be that place.

FC:  What are your thoughts on the level of competition in the frozen yogurt industry today? How do you think things will play out over the next few years?

JS:  This is the big mystery of the frozen yogurt industry. It is so easy to walk into a store and think “I could do this” (which is what we did!) and that always leads to a saturated market where many of the stores will have to close down.  We have yet to see a market that has avoided over-expansion and that has happened in each of our markets as well.

It’s a great product and a fun concept, but the demand for frozen dessert can only support a limited number of stores.  We don’t know how things will play out, and that is why we work so hard at hiring and training the best employees and reinvesting in our people and our stores.

We also believe that Orange Leaf’s yogurt is a truly unique product and think that will add to our ability to weather the storm of market saturation.

FC:  What were some of the most challenging episodes of your franchise journey so far?  With the benefit of hindsight, what 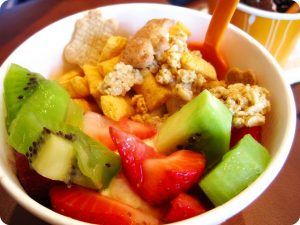 would you have done differently?

JS:  Growth is always difficult, and finding ways to grow at the appropriate pace and with the right people has been difficult.  In a market that has exploded as quickly as Frozen Yogurt, there is a tendency to try and open a new store every few weeks to try and “claim” new territory.  We have realized that we may not be first in every market we enter, but we have a really talented team at this point and believe we can offer a great product and experience in any market.

FC:  What is the one piece of advice you wish you had gotten from a current franchisee of Orange Leaf before you decided to invest in the franchise?

JS:  In our case, one of our biggest advantages turned out to be our naiveté.  So that’s a tough question.  We went into the business with no franchise or food experience, and that meant we also had no constraints.  We tried anything we could think of and we weren’t afraid to fail.  A year later, we are still trying new things and are focused on keeping things new and interesting across multiple stores.