The original Quaker Steak & Lube was built in an abandoned gas station in Sharon, Pa. back in 1974.  What began as a modest cook-your-own steak restaurant, has expanded to over 40 locations throughout North America.  The unique décor, including gas station memorabilia, Corvettes, motorcycles and race cars suspended from the ceilings, combined with a crowd-pleasing menu and hugely popular events has afforded The Lube a cult-like fan following.

Today, Quaker Steak & Lube has become one of the fastest-growing restaurant chains in the country.  Widely known for its Best Wings USA and over 21 sauce varieties, the company has experienced unprecedented growth in 2011 with the opening of 8 new locations, and signed franchise agreements to develop more than 35 restaurants in the U.S. over the next few years. Currently, Quaker Steak & Lube has 47 locations in 15 states and Canada, with plans to open 12 more in 2012. 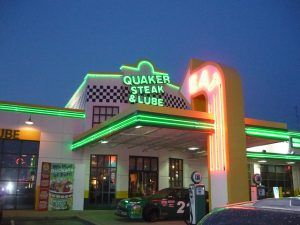 According to John Longstreet, president and CEO of Quaker Steak & Lube, “2011 has been a tremendous year for our brand, and with these franchise development agreements and corporate restaurants, we are in a unique position to double our footprint in an extremely short time period. Our high average unit volume, quality food and memorable dining experience are the keys to our success, and we look forward to continuing to grow and evolve our company in 2012.”

Quaker Steak & Lube has won hundreds of national and international awards for its wings and sauces — most notably, the 2010 Festival Favorite at the National Buffalo Wing Festival in Buffalo, New York, and most recently, the Cheers Beverage Excellence Award in 2012 for Best Beverage Merchandising for its signature Bar Jars.

Investors looking to own and operate Quaker Steak & Lube restaurants should possess a minimum liquid capital of $1 million, a net worth of $3 million and must be willing to commit to multiple locations.  Prior hospitality or restaurant operations experience is strongly preferred.

And before you go, check out this very informative video on Quaker Steak & Lube:

Previous post: What Makes Gold's Gym One of the World's Top Fitness Franchises?

Next post: What Makes BIGGBY COFFEE So Special and Why Should We Care? Read the Company's Response