(Ambrosio’s note:  Finally, an interview with a frozen yogurt franchisee!  This is one interview that I had been pursuing for so long, but I’m happy to say that this exclusive with Bob Stark is well worth the wait.  Although not many individuals can follow Bob’s footsteps in opening 20 frozen yogurt stores in 1 year, the words of wisdom he shares from his years of experience as a mall developer are invaluable even to those interested in opening just one frozen yogurt store.  Thank you, Bob, for taking the time to chat with us!)

My name is Bob Stark and I am the CEO of a large shopping center development firm in Northeast Ohio (greater Cleveland area).

A couple years ago, my son who lives in Los Angeles told me about the new wave of self-serve frozen yogurt operations, which at that time really had not yet spread beyond the West Coast. I was interested as a landlord to find another good concept as a tenant.  When I met the CEO and top brass of Menchie’s, I was so impressed at these extraordinarily bright, young people – the Menchie’s team of executives – that I said something I never thought I would say, which was “Maybe, we should open our own stores in our own developments.” So that’s how it began.

We did consider other frozen yogurt brands aside from Menchie’s but not for very long.  Once I met the team behind Menchie’s, I didn’t have to look any further.

We’ve opened 6 Menchie’s locations in 3 months, and we’ll be open in 2 more by the end of the year. We’ll be opening 12 more by June 1st.  So by mid-2012, we’ll have a total of 20 stores open.  I’m happy to report that our stores are already among the highest performing Menchie’s in the United States.

These stores are located in the suburbs of Cleveland, Akron and Canton in Ohio.

I’m not involved in the day to day operations, because this is a little bit different.  We’re not a mom and pop franchisee.  So we have a whole organization underneath me.


Our expertise in finding the right location for the concept is our greatest strength.  Another asset is our ability to scientifically approach the expense side by making certain to hold labor and cost of goods down below a certain percentage of gross sales.  Figuring out exactly how many people you need to work in what times of the day is probably one of the most critical factors to success (aside from the location, of course).

I would call my relationship with the home office of Menchie’s more of a partnership – that’s how good it is.  What I like most is their laser focus on the brand.  The other thing I like is that they’re innovative.  We have the character Menchie that is like Ronald McDonald and that’s very deliberate.  The innovation in flavors and the quality of frozen yogurt — which is leading very soon to the distribution of Menchie’s private label — are signs of the inventive spirit of the company and the great things in store in the future.

Over time, when enough stores are on the ground and the brand has been built to the point of critical mass, I hope more local and national advertising will come. 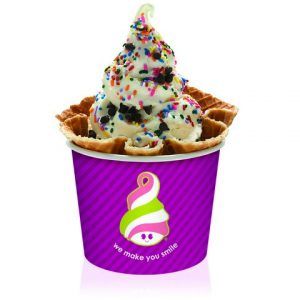 I think overcrowding in the frozen yogurt space is a serious issue.  The approach we’ve taken in doing 20 stores in a year and grabbing all of the best locations in our market in that time is to create such an overt market dominance that the competition runs the other way.

If you don’t have the very best location — if you don’t know what that means and if you can’t find it – then you’re not going to realize the full potential of the brand.  Find a location, if it’s possible, that has some context.   That is, it’s in a beautiful setting, with similar food users and it’s a place where people want to go and hang out.

Previous post: And the Award for Coolest Franchise of 2011 Goes to GameTruck! Exclusive Interview with Scott Novis, Founder and President (Part 2)