(Ambrosio’s note:  I’ve been doing some research on “under the radar” franchise concepts in the hope of discovering some hidden gems worth featuring on the blog.  One of the franchises that really made on impression on me was GameTruck.  This is the coolest franchise concept I’ve come across in a long time — and I’m not even a gamer!  It just seems like a really fun business to own.  It’s my pleasure to share with you this exclusive interview with Scott Novis, Founder and President of GameTruck Franchise Licensing, LLC.  In the spirit of fun, I’m naming GameTruck as the recepient of Franchise Chatter’s Coolest Franchise Award for 2011!)

Scott Novis is no stranger to video games nor innovation. His two engineering degrees, 10 issued patents, and nearly a decade of video game development experience give him unique insight and passion in creating innovative business solutions and concepts.

After receiving degrees in Electrical and Computer Engineering from Arizona State University, Scott spent several years working abroad to gain insight and exposure to the global economy.  He then spent half a decade working in Motorola’s research labs where he helped develop graphics and display technologies that ultimately resulted in the issuing of his patents.

Attracted by the exciting pace of technology and innovation in the video game space, Scott joined Rainbow Studios as its VP of Development. The studio was responsible for some of the most successful games of the PS2 era, including the birth of the ATV Offroad Fury Franchise. In all, Scott received credit on the development of 13 video games with sales in excess of 20 million units and revenues of $500 million.

Franchise Chatter (FC):  Can you tell us the story behind the creation of GameTruck?

Scott Novis (SN):  It started in 2004 when I was at my son’s 4th birthday party.  I was at a pizza arcade, one of those places I once heard a comedian describe as “casinos for kids”.  The part that really jumped out at me, besides what a miserable experience it was, was the video games.  They were so old.  I knew the games we made at Rainbow Studios crushed anything you could play in an arcade.  So the next day, I dived into trying to figure out how to recreate the experience I remember from being a kid.  I wanted to recapture the excitement of playing the best games with your best friends.  The result was GameTruck.

FC:  How does a GameTruck party actually work? 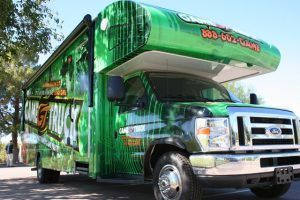 The GameTruck Mobile Video Game Theater is completely self-contained and all weather. No rain cancellations! It’s always 75 degrees and dry inside on our comfy 20 ft. long custom couch. We offer a venue for 16 players simultaneously.

We carry all the latest titles for multi-player fun across a broad spectrum of genres (Sports, Music, Adventure and Traditional) for any of the 3 game consoles (Nintendo Wii, Xbox 360 and PS3). The majority of our 50+ titles are rated Everybody and Teen, but we have it all. For older girls and boys, we link all 4 of our HD 240-HZ screens for 16-player Halo Battle or 8-player Black Ops! 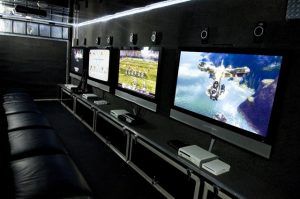 FC:  In the spring of this year, you appointed Mary Lynn Kelly, the creator of Arizona’s Challenger Learning Center, as your Education Division Director.  What are your plans for this education division?

SN:  Believe it or not, we are still very focused on video gaming.  I break video games into two segments.  Sports games and education games.  A well designed video game has more in common with education than movies, books, or music.  Why?  Because the gamer must participate.

A game — like a learning system — holds the player in a regiment of competency.  It’s a complex pattern that stimulates the brain the way the brain likes to learn.

If you look at video games this way, you see that games like Halo and Call of Duty are nothing but basketball with guns.  GameTruck created a sports video game industry.  If we can take one tiny sliver of the video game market and turn it into a successful birthday party business, why can’t we take the core of what games are and revolutionize education?

It’s simple, really — our interactive events leverage kids’ passion for video games to learn in new and exciting ways that save schools money, make teachers’ lives easier, and most of all create a lasting impression on the student.

FC:  Can you describe the target market for GameTruck and how big is the market potential for your business?

SN:  I realized after starting the business that the core of a GameTruck event is not only about playing the best games with your best friends. There is a

value for the parents as well.  In short, what is it worth for a Mom to have her son at home, with all of his friends, having the time of his life, safe, and most important of all, not in her house?

We think there is tremendous opportunity in this country for kids to come together and play together with our patented system.  I believe we can serve anyone who has outgrown a bounce house, all the way up to adults who still want to game together.

To read the second part of my exclusive interview with Scott Novis, please click here.

Next post: And the Award for Coolest Franchise of 2011 Goes to GameTruck! Exclusive Interview with Scott Novis, Founder and President (Part 2)