2.  According to the Curves website, “The exercise circuit consists of hydraulic resistance strength training machines for the upper and lower body and aerobic recovery stations. There are no weight stacks to manage or change.  Members push, then pull, rather than lift and lower weights, reducing the potential for soreness and injury.” 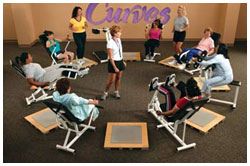 3.  While on the circuit, members spend 30 seconds at each station, and then move to the next one when prompted by the CD playing in the background.

4.  Women of every age find the equipment to be safe and easy to use. Curves has members from 12 to 105 years of age.

5.  A circuit coach is available to teach and motivate members to help them reach their fitness goals.

6. Curves has introduced a state-of-the-art personal coaching system called CurvesSmart. Every piece of equipment in the 30-minute circuit is programmed with the member’s information.  This enables CurvesSmart to automatically adjust to her body’s endurance level so she stays constantly challenged. CurvesSmart then produces detailed progress reports that show overall muscle strength and calories burned.

7.  Another new program is Curves Circuit with Zumba Fitness, a fun 30-minute class that mixes the moves of Zumba with the signature Curves circuit training.

8.  Members pay a monthly membership fee.  The actual rate depends on whether the member signs a 1-year contract or pays month-to-month. Special promotions and coupons are frequently available.  Since each location is independently owned and operated, rates vary by location. 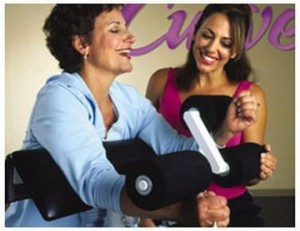 9.   In 1992, Gary Heavin and his wife Diane opened the first Curves, which was an immediate hit with women looking for an efficient workout in a comfortable environment.  They began franchising in 1995, and by the end of that first year, there were 50 franchise locations.  Within 36 months, Curves reached 1,000 locations.  And 10 years later, they became “The World’s Largest Fitness Center Franchise” (according to Guinness World Records), with nearly 10,000 locations in 75 different countries around the world.

11.  According to a recent article in the Wall Street Journal (WSJ) written by Richard Gibson, this stunning reversal of fortune is the result of 3 main factors:  the bad economy, the growing popularity of new fitness franchise concepts, and attracting the wrong kind of franchise owners.

12.  Franchisees say that, because of the prolonged economic downturn, many customers simply can’t afford memberships anymore.  Gary Heavin tells the WSJ:  “We feel pretty strongly about taking care of yourself. It’s more than a discretionary expenditure.  But it’s one of the first things to go when the economy is strained.”

13.  Management has been reluctant to go head-to-head with the likes of Anytime Fitness and Snap Fitness, who offer their members 24/7/365 gym access, even when the club is unstaffed.  Speaking to the WSJ, Mr. Heavin justifies his decision by saying “Curves is about providing a supportive environment for women, and an empty room filled with machines in the night is not my idea of a supportive environment. Can you imagine the headlines when a member in the middle of the night in a women’s-only gym is hurt or has a heart attack and there is nobody there? Our brand would be ruined in one instant.”

On this point, I tend to agree with Mr. Heavin.  Allowing members to work out when the club is unstaffed will require substantial additional investment in security and surveillance equipment, which is inconsistent with Curve’s low cost business model.

14.  On the subject of attracting the wrong kind of franchisees, Mr. Heavin tells the WSJ:  “We were kind of a victim of our own success.  Early franchisees started making a lot of money — and, in some ways, too much money. As a result, Curves attracted a lot of the wrong people — investors who wanted to make a buck or get rich quick.”

Mr. Heavin says club resales are partly to blame:  “Resales often came as new investors were looking to get rich quick with a passive investment, when running a Curves is actually a very active investment. While we did our best to inform them about the requirements of running a club, we were limited in what we could do to deny a resale.”

15.  This year, Curves plans to open less than 90 new locations in the U.S. and is concentrating on growing internationally. To re-energize the brand,  Curves is launching in the Fall a new weight-loss program, improved training for franchisees and their staffs, and an online “university” to teach nutrition. 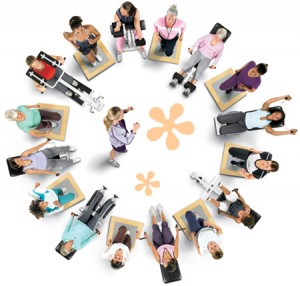 16.  Before opening a new location, new franchisees take part in the Club Development Support Program, a specialized program that teaches them everything they need to know about the initial steps required to open a club, as well as daily operations.

New franchisees have access to a computer based program that teaches all the necessary procedures and processes for operating a successful Curves club.

17.  Once open, franchisees have access to CurvesCommunity.com, an extensive website filled with tools and resources used in the daily management of the club (such as materials for advertising, internal and external promotions to generate business, and training materials).  Franchisees receive ongoing support from dedicated area directors and corporate support staff.

18.  The total initial investment to open a Curves location ranges from $31,825 to $39,100, which qualifies Curves as a low cost franchise, especially compared to other fitness franchises.

20.  A Curves franchise can operate in a space as small as 1,000 square feet which keeps rent and other operating costs low. According to Curves, “Payroll expenses are minimal when a franchise owner-operator hires a young person or student to work Monday through Friday evenings.” Other costs include insurance, utilities, and small miscellaneous expenses.

Next post: Oops, I Can't Believe I Missed This! I Just Found Out That ...