Before you even consider investing in a frozen yogurt franchise, take the time to learn what it really takes to succeed in this business.  Click here.

6 Things You Need to Know About Menchie’s Incredible Growth

1.  Menchie’s began franchising in 2008, following the successful opening of its first store in Valley Village, CA the year before.  Today, Menchie’s is the fastest growing self-serve frozen yogurt franchise worldwide.  The franchise recently opened their 100th store in West 19th Street Center in Houston, TX.  An additional 120 stores are currently in development, and the frozen yogurt chain is poised to have more than 250 locations by 2012.

2. Amit Kleinberger, CEO of Menchie’s says “Menchie’s offers an unparalleled store experience which creates lasting memories by making every guest smile — and this has helped us expand to 100 stores worldwide. Menchie’s fans see us as their second home. They have embraced our core values of family, community, education, and fun. Our focus has always been on community before commerce, and we deliver on that promise by going the extra smile. To many people around the globe, we’re the happiest place on earth.” 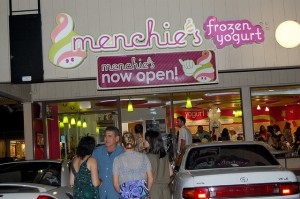 3.  Amit adds, “Enthusiasm from investors also reflects the company’s mission to ‘make you smile.’ I can see it on their faces and they can see it on our guests’ faces. It’s in our DNA. In 2011, we’ve opened nearly 40 stores already and plan to open about another 30 before the end of the year. Reaching the century mark in three short years clearly confirms the undeniable craving for Menchie’s and we’ll see that result in our reaching 250 stores in the next 12 months.”

5.  In 2010, Menchie’s was ranked 1st in Restaurant Business Magazine’s “Future 50” list, naming the frozen yogurt company the fastest-growing franchise in the restaurant industry (citing a 750 percent growth rate in 2010 – wow!). Menchie’s maintained their prominence on the “Future 50” list in 2011, securing 2nd place.


6.  Menchie’s reached the 100th store milestone by staying true to their mission to make every guest smile and be the friendliest place on earth. Franchisees provide a guest experience that is warm, welcoming, and fun. Menchie’s stores feature interactive elements such as chalkboards for kids, party rooms, music, arts & crafts, and indoor/outdoor seating areas where friends and family gather. Placing a focus on community, Menchie’s franchisees actively donate thousands of dollars to local school programs and charitable organizations.

Previous post: 14 Things You Need to Know About the Teriyaki Experience Franchise Opportunity