To read more exclusive articles on the top frozen yogurt franchises to invest in, check out our Fro-Yo Files section.

There’s no denying that the frozen yogurt franchise category is the flavor of the moment.  I don’t know when this love affair will end, but for now, interest in anything related to fro-yo franchises is intensifying.  I’d like to offer a special treat to my regular and new readers by ranking the top frozen yogurt franchises of 2011 and sharing some highlights from some of my most popular blog posts to date.  As you can tell, I have a bias in favor of the self-serve model because of the lower labor costs and its popularity among consumers.

If there are any frozen yogurt franchises under my radar that you’d like to be the subject of a future blog post, leave a comment or send me an email and I will reach out to the companies mentioned.  In the meantime, enjoy my selection of the best frozen yogurt franchises of 2011.  (By the way, if you’re into lists like I am, check out my most popular blog post to date, Franchise Chatter’s 10 Franchises with the Best Business Models, and 1 with Possibly THE Worst, June 26, 2011) 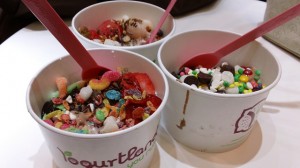 “I personally think the flavors offered at Yogurtland are unique and worth a special trip. The variety of interesting flavors was just dizzying.  They had Taro, Toasted Coconut, Red Velvet Cupcake Batter, Pecans & Pralines, Peanut Butter, Pumpkin Pie and so much more.  There was also an amazing array of toppings, but I decided to skip those because I wanted to savor the actual flavors of the yogurt.  I couldn’t decide which flavors to try, so I ended up with a pretty delicious mess.  But I was in heaven with every bite.” (The Franchise Chatter Blog, Should I Invest in a Yogurtland Franchise, April 14, 2011)

“Yogurtland is the original self-serve model.  We created and defined the self-serve experience. Our emphasis on R&D and product development is one of our key points of differentiation. Nearly all of our competitors are using the same frozen yogurt provided by one or two sources.  Each of our flavors is formulated in-house by a tremendous group of R&D and Product Development specialists.”  (Larry Sidoti, VP of Development and Operations for Yogurtland, Franchise Chatter Exclusive:  Q&A with Larry Sidoti, Yogurtland’s VP of Development and Operations, June 13, 2011) 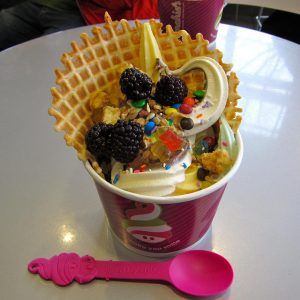 “What I admire most about Menchie’s is their emphasis on providing a great customer experience and creating a family-friendly environment.  The Menchie’s logo makes it very clear that they cater to families with young children — and they seem to be very successful at it.  From all the pictures I’ve seen, their stores are like magnets for kids and teenagers — and their parents don’t seem to mind one bit!  It seems like a place where the entire family can enjoy.” (The Franchise Chatter Blog, What Sets Menchie’s Apart from Other Frozen Yogurt Franchises, May 6, 2011)

“I like to say that we at Menchie’s ‘sell smiles’ via frozen yogurt.  We offer such a unique environment that when people come by, they don’t just get a delicious product, they get a full 360 degree experience.  It’s a multi-layered formula that provides our customers with friendly service, a fantastic product, a family-friendly environment, and a memorable experience. While our competitors focus solely on the food, we focus on the experience – which, of course, also means having great food and service.  But it’s really the complete experience that sets us apart.” (Amit Kleinberger, CEO of Menchies, Exclusive Interview with Amit Kleinberger, CEO of Menchie’s, One of the Fastest Growing Frozen Yogurt Franchises in the World, May 23, 2011)


“Menchie’s recently launched a new platform of toys to increase customer loyalty among families with young kids. With each cup of frozen yogurt purchased, Menchie’s will offer customers a free Sweet Friend collectible toy.  I think it’s very smart for Menchie’s to focus their marketing efforts on families because no other frozen yogurt franchise has explicitly gone after this market, even though the product appeals especially to kids and teenagers.  This new platform of toys will distinguish Menchie’s from the competition and, if executed properly, will make them the go-to frozen yogurt brand for families.” (The Franchise Chatter Blog, Menchie’s Frozen Yogurt Franchise Goes After Families with Young Kids, and Customers Looking for Unique Flavors, July 26, 2011) 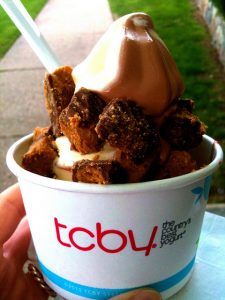 “TCBY is one of the original and most recognized brands in the frozen yogurt category.  TCBY has been a frozen yogurt innovator since their first shop opened in Little Rock, Arkansas in 1981. In 2010, TCBY introduced a new self-serve platform and a contemporary look that appeals to customers of all ages.” (The Franchise Chatter Blog, TCBY Joins the Self-Serve Frozen Yogurt Bandwagon with Revamped Store Design and Identity, August 12, 2011)

“This new design has not only surged interest for new franchisees, but existing ones as well. Current franchisees understand that the self-serve model is forward-thinking and will serve their customers well in their local markets. We have had several franchisees express interest in not only expanding their portfolios, but also in converting some of their existing units to self-serve. We currently have six self-serve locations in development and are projecting to open an additional 100 by the end of 2011.” (Rob Street, Senior VP of Development at TCBY, TCBY Joins the Self-Serve Frozen Yogurt Bandwagon with Revamped Store Design and Identity, August 12, 2011) 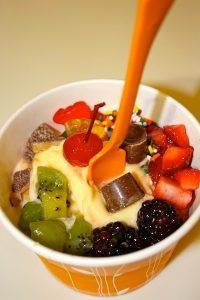 “The franchise fee for a single Orange Leaf location is $12,000 (about a third of the $35,000 franchise fee for Yogurtland and $40,000 for Menchie’s).  Orange Leaf’s monthly royalty is 3% of gross sales (half of the 6% royalty fee charged by Yogurtland and Menchie’s) and their monthly marketing fee is 0.5% of gross sales (a quarter of Menchie’s and Yogurtland’s marketing fee of 2% ).” (The Franchise Chatter Blog, Looking for a Cheaper Alternative to a Menchie’s or Yogurtland Franchise? Consider the Orange Leaf Frozen Yogurt Franchise Opportunity, August 7, 2011)

“It does a lot of good if we can bring in a franchisee, put a system in place where they can be successful and go do another store, and another store, and another store — not where we burden them with a fee that prevents them from being able to reinvest their capital and help us grow the company.” (Reese Travis, CEO and part-owner of Orange Leaf, Looking for a Cheaper Alternative to a Menchie’s or Yogurtland Franchise? Consider the Orange Leaf Frozen Yogurt Franchise Opportunity, August 7, 2011)

And a Few Non-Yogurt Frozen Treat Franchises Worth Mentioning 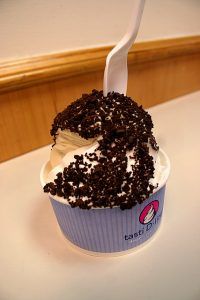 “Tasti D-Lite is a soft-serve, dairy-based frozen dessert that is significantly lower in calories, fat, and carbohydrates than ice cream and much lower in sugar than frozen yogurt. It’s made from natural ingredients with virtually no preservatives added. It’s not ice cream because it does not have the high butterfat or total solids content to be called ice cream. And it’s not frozen yogurt because it doesn’t contain active yogurt bacteria. Relative to ice cream and frozen yogurt, Tasti D-Lite is a guilt-free treat. In a 4 fl. oz. serving, most Tasti flavors contain 70 calories, 1.5 grams of fat, 13 grams or less of carbs, and 2 grams of protein. They are currently testing a self-serve format in Las Vegas.” (The Franchise Chatter Blog, Too Many Frozen Yogurt Franchises in Your City? Consider Tasti D-Lite, a Low Calorie Frozen Dessert Franchise, July 27, 2011) 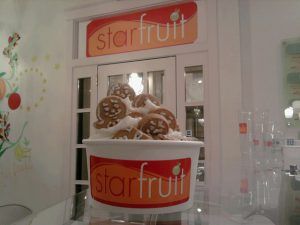 “According to the company, a Starfruit Cafe is better than a typical frozen yogurt shop because its entire selection of lowfat smoothies, frozen treats and parfaits are made with Lifeway Kefir, which packs up to four times the probiotics of yogurt. The secret to Starfruit’s health-boosting power is the 10 live probiotic cultures found in Lifeway Kefir, a creamy “miracle drink” that serves as the base of its products (Yogurt typically contains just two or three probiotics). There are currently 4 Starfruit Cafe retail stores — all in the city of Chicago — and they will be unveiling a mobile food truck specially designed to deliver Chicagoans their frozen treats.” (The Franchise Chatter Blog, Looking for Something Healthier than Frozen Yogurt, but Just as Delicious? Check Out the Starfruit Cafe Franchise (Frozen Treats, Smoothies), August 11, 2011) 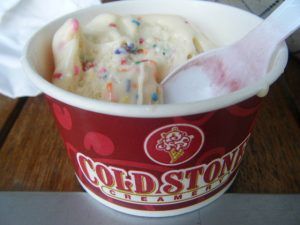 “The new line of low-calorie, low-fat, probiotic frozen yogurt was introduced in select locations in January 2011, and was apparently well received enough to justify a nationwide rollout. Cold Stone’s frozen yogurt will be available alongside their super-premium ice cream to offer guests more options for creating the brand’s signature creations with fruit, nuts, and candy mix-ins. The brand also launched this past January a new retail format called the Cold Stone Creamery Yogurt Bar — a soft-serve, self-service frozen yogurt concept with seven current locations. Additional stores are in design and construction. (The Franchise Chatter Blog, Cold Stone Creamery Joins the Frozen Yogurt Bandwagon with the Nationwide Rollout of Its Own Frozen Yogurt Line. Next Up: Cold Stone Creamery Yogurt Bars, July 28, 2011)

Next post: Exclusive Interview with Todd West, VP of Operations and Franchise Sales for Starfruit Cafe ("We are not just your typical fro-yo concept.")