Key Takeaways, Insights, and Facts from the Article “Facing the Franchise Challenge” Written by Erin Golden (World Herald Staff Reporter) and Published in the Omaha World-Herald on August 1, 2011

This is an excellent article highlighting the challenges that prospective franchisees continue to face when it comes to financing their franchise investment.  The situation is not hopeless as franchise loans are still available, but prospective franchisees must be ready to take a greater equity stake in the business than was required just a few years ago.  And it’s important to remain flexible and open to other franchise opportunities for which qualifying for a loan might be easier.

1.  After a few years of managing nutrition stores, Chad Case decided to open his own Max Muscle Sports Nutrition store in Lincoln, Nebraska in 2005.  Four years later, he was operating three more locations in Omaha, Bellevue, and Papillion and serving as the company’s regional director of franchise development.  For the past five years, he’s been named Max Muscle’s Franchisee of the Year.

2.  Chad appreciates the fact that Max Muscle franchisees enjoy a lot more freedom when it comes to running their own stores, relative to franchisees in other systems who are bound by much stricter rules.  Chad believes that the key to his success is finding a company “that is going to support you in the way you need to be supported.” 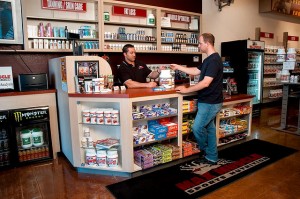 3.  According to the International Franchise Association (IFA), there were more than 765,700 franchises operating in the United States last year.  These franchises had cumulative sales of $706.6 billion and employed 7.6 million employees.  IFA estimates that the number of franchise companies and employees will increase by 2.5 percent this year, while total sales is expected to jump by about 4.7 percent to $739.9 billion.

4.  The biggest obstacle for prospective franchisees today is financing.  Last year, franchise loans were down between 40 percent and 50 percent, according to an IFA report.  “There’s still a lot of money available to potential franchise owners, but banks are now requiring you to be squeaky clean. If you’re perfect, you might achieve 70 to 80 percent financing,” according to Tom Sampson, franchise development coordinator for Max Muscle.  This is in stark contrast to a few years ago when getting 90% financing was common.

5.  Franchise consultant Steve Beagelman emphasizes the importance of matching people with the right franchise. If a prospective franchisee cannot qualify for a loan for one type of business, there are other franchise opportunities with a smaller initial investment that may be a better fit. Some franchise companies will even help people roll over money in a 401(k) to invest in the business.

Previous post: Contest: CruiseOne Franchises to be Awarded to 5 Outstanding Current, Laid-Off or Retired Teachers Looking for a Second Chance at Success

Next post: What I Had for Lunch Today at My New Favorite Franchise Discovery, Freshii: Warrior Chicken Rice Bowl