Lists are always subjective and this one is no exception — in fact, I’d say it’s more subjective than most..  It’s not clear what criteria Inc. Magazine used to decide which franchises made the list.  Because the selection criteria is quite murky and the franchises included are unexpected and in some cases unknown, it gives the impression that it’s more of a marketing piece rather than a serious list.

But what I do find useful about this list is that it introduced me to several unique franchise concepts that I’d never heard before.  So from that perspective, I think this list is worth reading and sharing.  I’ll let you decide if you agree with Inc. Magazine’s choices for the most promising franchises of the year. 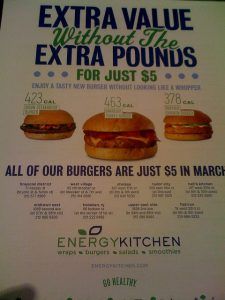 1.  Energy Kitchen – a quick service restaurant concept where nothing on the menu is over 500 calories, and every dish is either grilled, baked, or steamed.  They currently have just 10 units, but their goal is to have 1,000 locations over the next 10 years.

2.  Red Mango – one of the pioneers in the fast-growing frozen yogurt category, this South Korean brand invaded the US market in 2007.  In 2009, Red Mango opened 42 units in Texas and New York, with an intermediate goal to have over 550 locations by 2015.

3.  Smashburger – competes with Five Guys Burgers and Fries in the “better burger” category.  They currently have 100 locations open, but plan to double that number in the next year.  They are expanding aggressively in the Northeast, particularly in Long Island and Brooklyn, New York.

5.  Planet Beach Contempo Spa – for an affordable monthly fee, Planet Beach members have unlimited access to fully automated and push-button spa and UV services such as tanning, massages, facials, and teeth whitening.  They currently have 340 franchise locations in 38 states and 9 countries.

6.  Edible Arrangements – the company that created the fruit bouquet category is now the subject of a lawsuit brought by its franchisees for allegededly altering its business agreement and unfairly imposing new company-wide mandates.  It opened 84 stores in 2010 and recently signed its 1,000th franchise agreement.


7.  BrightStar Care – this is a franchise that provides in-home care to seniors.  They have very agressive growth ambitions, with the goal of having 400 locations open by the end of this year, from just 163 in 2010.  I’ve been noticing a lot of ads and media articles on BrightStar recently and this seems to be part of their aggressive expansion strategy, which also includes the launch of 7 new brands in the next 10 years to give franchisees the opportunity to expand their service offerings.

9.  Junk King – a fast growing junk hauling franchise that competes with the likes 1-800-Got-Junk. It markets itself as “America’s Fastest and Greenest Junk Removal Service.”  The company is based in San Carlos, CA and has recently expanded to Massachusetts, Colorado, and Arizona.

10.  Planet Fitness – while the 24/7 neighborhood fitness clubs like Anytime Fitness and Snap Fitness have gotten all the buzz, Planet Fitness has also grown significantly (they’ve grown over 326% in the last 3 years).  They are trying to differentiate themselves by promoting a friendlier, no-pressure, and fun environment, with monthly pizza nights and free Tootsie Rolls.

Next post: QSR Magazine's 10 Best Franchise Deals of 2011: With Some Very Useful Data on the Average Unit Volumes of Top Franchises