(Ambrosio’s note: When Shawn offered to do a guest blog post on the creative marketing strategies of trendy franchises, I was instantly intrigued.  When he said that he would be using frozen yogurt, burger, and cupcake franchises as case studies, I was sold.  These categories are some of the most popular among my readers, so I was excited to read Shawn’s take on the subject.  He does not disappoint.  Thank you, Shawn, for your fresh and original guest blog post!)

The franchise is fresh again. While franchising opportunities for brands like McDonald’s, Quizno’s, and Papa John’s are still doing pretty well, there’s a group of companies setting themselves apart in the franchise world by offering higher quality products, better customer service, or just unique and highly desirable items that can’t be found anywhere else. These tactics are quite obvious right now in the burger, yogurt, and cupcake niches. A few standouts are simply leaving their competitors in the dust, to the point where larger brands are going as far as changing their menus and remodeling their restaurants to compete.

Smart franchisors are also setting themselves apart by using social media to reach out to customers. This kind of marketing offers a more immediate payoff than a print ad or a commercial, and can be targeted to a franchise’s community. For example, by creating a Facebook page, a local burger joint can offer customers in the immediate area special coupons or deals that aren’t available nationally. It breeds loyalty, and provides a high return on the marketing investment. A handful of lesser-known brands are starting to make names for themselves outside the communities where they got their starts.

Another way franchisors are doing things a little better than the competition is by using business networking sites to connect with other business owners. For example, the community at BizSugar is a place where business owners can go not only to get advice when things are bumpy, but also to give advice, thereby establishing themselves as experts in the space. It’s a supportive place that’s also great for sharing information. Members use on-site tools to vote up the content they find most useful, so it’s easy to find the most valuable content at a glance.

Better quality, better marketing, and better networking — just a few of the tools in the contemporary franchisor’s toolbox. Here are a few companies that are reinventing the trendy franchise by using these tools, and by simply offering good products. 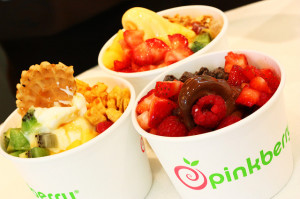 Frozen yogurt was all the rage in the ’80s. During a time when exercise videos took off, and Jane Fonda was considered a fitness guru, frozen yogurt quickly became part of the health kick. It was marketed as a healthy alternative to ice cream — have your treat, and still lose weight. Companies like I Can’t Believe It’s Yogurt and TCBY (The Country’s Best Yogurt) sprang to life, and rode the wave until the ’90s when coffee houses became the new franchise fad, and ice cream shops became popular again. It wasn’t until Pinkberry launched in 2005 that frozen yogurt became trendy again, and now ice cream chains like Cold Stone Creamery are taking notice, and adding frozen yogurt to their menus.

But where Cold Stone lets you add extras like sprinkles, chocolate chips, or bits of Oreo cookie, Pinkberry offers fresh fruit, perpetuating the not-always-accurate perception that yogurt is healthier for you than ice cream. Many kinds of frozen yogurt can have just as much fat and sugar, and just as many calories as ice cream. But in a world where diabetes is rapidly becoming an epidemic, that perception of yogurt being a healthier option, accurate or not, carries a lot of weight — no pun intended — and boosts sales. Aside from that, Pinkberry yogurt is just delicious. So delicious, some say, you can forget you’re eating yogurt and not ice cream. When your product is food, the primary way to get and keep customers is to just make it taste better than what’s already out there. That’s what’s happening in the burger kingdom right now. 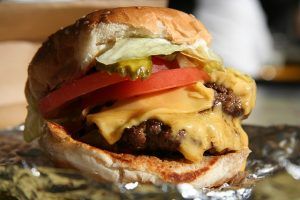 A few years ago, Ruby Tuesday had the idea that it would reinvent itself as a gourmet burger restaurant with a few other offerings on the menu, along with their ever-present salad bar. They took some of their most popular items off the menu, redecorated their restaurants, switched to trendier dinnerware, and even upgraded their paper napkins to a heavier grade of paper. And finally, they charged gourmet burger prices, the most expensive being $10.99 — for one burger. It worked until the economy tanked, and medium quality burger joints like Five Guys Burgers and Fries started edging out the pricier competition.

Five Guys found their niche nestled firmly between fast food joints and casual sit-down places like Ruby Tuesday, Chili’s, and Applebee’s. The franchised chain offers burgers made with higher-quality ingredients than fast food places, and about a pound of peanut-oil-fried French fries, all for a little more than what you’ll spend at Burger King, but less than the higher-end burgers at Ruby Tuesday and Chili’s. Customers who want fast, quality food can get it at Five Guys without spending as much as they would at a full service restaurant, and without having to tip servers. The model is definitely working. Five Guys is planning to open 600 new locations in the United States over the next couple of years, for a grand total somewhere in the neighborhood of 1,400 stores across the country. On the web savvy side, Five Guys also offers online ordering. On Ruby Tuesday’s site, you can reserve a table, which only furthers the appearance of their being out of touch with cost-conscious customers. 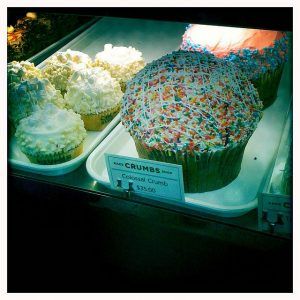 It seems unlikely that anyone has ever not liked cupcakes, but their current popularity and ubiquity can be traced to when Carrie and Miranda of Sex And The City indulged in cupcakes from New York City’s Magnolia Bakery.  Years later, the cupcake explosion continues, and while Magnolia bakery does not franchise (all the bakeries are owned by one family), their biggest competitor, Crumbs Bake Shop, is expanding at a rate of about 55 stores per year. Crumbs is currently found mostly in New York City and Los Angeles, with a handful of outlying locations in a few other eastern states, and a lone Midwest store in Chicago. With 35 stores now open, the plan is to have 200 up and running by 2014.

But a cupcake is a cupcake, right? So what makes the cupcakes from Crumbs so special? Other than delicious grownup flavors such as margarita, apple cobbler, and cappuccino, Crumbs makes colossal cupcakes. Yes, that’s their actual name, and for good reason. They stand about six and a half inches high, and require two hands to carry. And not only does Crumbs deliver to local areas, they ship. They’ve also made a strong showing in the social media realm with a free iPhone app that helps you find locations, shows detailed cupcake descriptions, and allows you to buy gift certificates. With those extras, they’re spreading their brand across the country without having to wait until their stores are open everywhere.

A lot of business success can be attributed to timing, luck, and just plain hard work. But what can put a company that franchises over the top is focusing on the little details that are important to customers, and finding ways to offer more for less, which is what will make a trendy franchise stick around well beyond the trend.

Shawn Hessinger is the community manager of BizSugar, an online community of small business owners.