I found a terrific article on Jared Fogle, the longtime spokesperson for Subway, written by Steven Pease for Franchise Times (June-July 2011 issue).  Here are 10 things I learned about Jared the Subway Guy from Steven’s article:

1.  When Jared was a 19 year old college student,  he weighed over 425 pounds.  After being diagnosed with edema (a circulatory condition that trapped fluid in the lower half of his body), Jared decided to go on a strict diet consisting of a 6-inch Subway turkey sub and Baked Lays for lunch, a footlong Subway veggie sub for dinner, and 1 can of diet coke a day.  Within a year, he dropped 245 pounds.

2.  After seeing Jared on Oprah, Ron Perruzza, a Subway franchisee based in the Chicago area, pitched Jared’s story to the marketing director of Subway.

3.  Over the last 12 years, Jared has been in roughly 240 Subway TV spots and still does over 200 public appearance a year, telling his story at store openings, to kids, and the media. 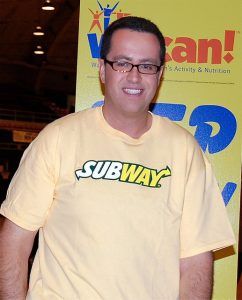 4.  Fogle hasn’t been in any new Subway commercial since late 2010 and is still waiting to hear what’s next from the franchise’s national ad board.

5.  From 2003 to 2010, Jared was also the spokesperson for Direct Technology, a credit card merchant and former vendor for Subway. Jared was chosen because he paid with his father’s credit card for every one of the Subway sandwiches he consumed during his initial diet phase.  Paying with a credit card for a $4 sandwich was uncommon 11 years ago.

6.  Now 33 years old, Jared has been married, divorced, and married again.  He still lives in his hometown of Zionsville, Indiana, with his wife Katie.

9.  When he retires as the spokesperson for Subway, Jared says there is a  good chance he’ll become a franchisee of the company.  (“I have an education in Subway on so many levels,” Jared says. “I know the franchise better than some of the owners, and maybe even Fred (CEO Fred DeLuca). So maybe I’ll be a franchisee or something down the road.”)

Previous post: The Top 50 Franchises with the Most Multiple Unit Franchisees