What I Like About the Flip Flop Shops Franchise Opportunity

1.  Flip Flop Shops is the first and (so far, the only) retail chain in North America dedicated to selling flip flops and sandals.  (Sandals is the general term for any type of open-toe shoe, while flip flops are a type of sandal that is fastened only by a thong between the toes). They also sell a line of polarized, scratch-resistant sunglasses called Filtrate, and a private-label lip balm, but 98% of the merchandise in their stores are flip flops and sandals.  They focus on selling the most popular styles from top brands like Flojos, Sanuk, OluKai, Cobian, Reef and Havaianas.

Sandals are a $20 billion dollar industry. I was amazed to learn that sandals have outsold athletic footwear for the past 2 years.  Before Flip Flops Shops, sandals and flip flops could only be bought online or in retail stores where sandals are only a very small part of the total product mix.  Flip Flops Shops is a unique, niche retail concept that targets this multi-billion dollar opportunity, which no other retailer has paid much attention to. 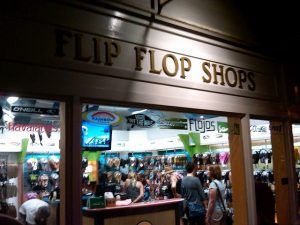 2.  Flip Flop Shops is led by three experienced franchise executives (Brian Curin, Darin Kraetsch, and Alan Woods) who were instrumental in growing Cold Stone Creamery to more than 1,000 units and whose Raving Brands Holdings company in the 1990’s launched Moe’s Southwest Grill.  After selling their stake in Raving Brands, they took more than a decade off before finding their next big franchise concept.

Brian discovered Flip Flop Shops in an Arizona mall and, together with his former colleagues, partnered with the founders Sarah Towne and Todd Giatrelis in refining the concept before offering franchises in 2008.

1.  No matter what the executives of this franchise say to the contrary, this is a concept that will do best in year-round warm climates (their top store is in Las Vegas).  According to Brian Curin, some of their highest grossing stores are in Edmonton, Alberta and Denver, Colorado.  He goes on to say that there’s a huge pent-up demand for Flip Flop Shops in the Midwest and Northeast, where there’s no supply of sandals and flip flops during most of the year, especially when people take warm-weather trips in the winter.


But this contradicts the actual history of the company.  The founders Sarah Towne and Todd Giatrelis opened their first store in Boston, which didn’t gain traction as fast as they had expected.  This led the two to open more retail locations in Arizona and California, where the stores performed much better.

So prospective franchisees should consider their own local markets (which they know better than any franchise executive ever will) to determine if there is enough demand for sandals and flip flops year round.