What I Like About the Auntie Anne’s Franchise Opportunity

1.  Auntie Anne’s product line revolves around its signature pretzels.  They come in the form of traditional pretzels, stix, nuggets and wrapped around Nathan’s Famous hot dogs.  The pretzels come in a variety of sweet and savory flavors and can be served with  different flavored dips.   The tightly focused menu not only simplifies operations, it also reduces input costs.  Since the ingredients used are inexpensive, I consider Auntie Anne’s to be a relatively high margin food business.

With the introduction of the pretzel dog, Auntie Anne’s is no longer just a snack option.  Customers can now go to Auntie Anne’s for a light lunch or dinner — potentially increasing customer counts, transaction amounts, and daily revenues.

2.  Auntie Anne’s can be operated in very small retail spaces.  A typical in-line store location ranges from 450 to 650 square feet.  The smaller baking kiosk can be operated in as little as 180 square feet of space, although a minimum of 230 square feet is recommended (an additional 150 square feet of storage space is needed somewhere in the vicinity of the kiosk).   The smallest retail format is the satellite retail kiosk consisting of just 76.5 square feet.  This assumes that baking is done in the main store or offsite (this is ideal as a second store location in a venue that already features an in-line store).

The very small footprint (even of a full sized store) makes it possible to operate an Auntie Anne’s in a high traffic location while keeping overhead costs manageable. 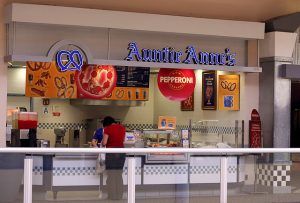 4.   Auntie Anne’s has approximately one corporate employee for every three franchise partners.  This very low corporate employee-to-franchisee ratio makes it more likely that franchisees get the support and attention they need from the head office.


5.  Auntie Anne’s, the franchisor, is a model for transparency.  The company’s website volunteers a lot of valuable information that most other franchisors would rather keep to themselves.

For example, Auntie Anne’s reveals the chain’s average net sales by venue (train stations: $791K; alternative locations: $278K; Walmart: $277K; outlet centers: $460K; airports: $765K; enclosed malls: $497K).  And they even disclose the locations, owners, and contact information of current stores for sale (there were 15 stores for sale at the time of this writing).

1.  This is more of a concern rather than an outright negative.  Auntie Anne’s was recently purchased by FOCUS Brands (the owner of Carvel, Seattle’s Best, Cinnabon, Schlotzky’s, and Moe’s Southwest Grill).  FOCUS Brands is an affiliate of Roark Capital Group, an Atlanta-based private equity firm.  To get a decent return on their investment, FOCUS will have to either increase the average revenues per store or sell more franchises.  It’s much easier to do the latter, so my fear is that the franchise will expand to the point of saturation (they currently have over 1,100 stores around the world).

Slow and steady growth has led to the success of Auntie Anne’s thus far.  Rapid expansion has hurt other chains that offer a limited menu of treats such as Cinnabon and Cold Stone Creamery.  I hope the new owners of Auntie Anne’s do not make the same mistake.

Curious about the average net sales and net operating profit for Auntie Anne’s franchised units in 2010?