What I Like About the Five Guys Burgers and Fries Franchise

1.  Five Guys Burgers and Fries grew from a small family business that started out with a single carry-out burger joint in Alexandria, Virginia in 1986.  Jerry and Janie Muriel gave the four young Muriel brothers the option to “start a business or go to college.”  Guess which one won out?  A fifth brother was born, and four sit-down restaurants were added in the 1980’s and 1990’s, as Five Guys developed a cult-like following and was consistently voted as the best burger in the Washington DC metro area.

Five Guys began franchising in 2003 and in just under 18 months, the rights to open 300 restaurants were sold.  Now, there are over 750 restaurants in 40 states and 4 Canadian provinces.

The phenomenal growth of the franchise is particularly impressive because the chain grew by word of mouth based primarily on the quality of the food.  There were no splashy marketing campaigns backed by the resources of a huge corporation.  It was all about the burger — and that’s a good thing.

2.  Five Guys offers a very focused and limited menu consisting of their signature burger (with or without cheese and/or bacon; either regular-sized or “little”), 4 kinds of hotdog, a veggie or grilled cheese sandwich, and fries.  No chicken sandwiches, no fish sandwiches, no sundaes or milkshakes.  This makes their operation a lot simpler and requires far fewer ingredients compared to the big boys like McDonald’s and Burger King. 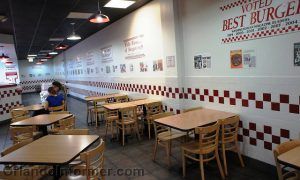 3.  The decor of a Five Guys restaurant is as plain as you can get:  just white and red tile walls with wooden tables and chairs.  Although Five Guys will never win an award for best restaurant design, from an investor’s point of view, the no-frills look is a huge plus because it keeps the build out costs low.

4.  Five Guys has a huge and loyal following, as evidenced by their over 500,000 Facebook fans, over 100,000 Google searches per month, and hundreds of Flickr photos.   Considering there are just over 750 restaurants currently open, these are some impressive numbers.

1. According to the Five Guys franchise website, all the markets for development in the United States and Canada have been sold.  Any prospective franchisee who wishes to enter the system can do so only by buying a franchise from the current owner or rights holder.  So at this point, investing in a Five Guys franchise  is a far more expensive proposition.

This is great for all current franchisees because their franchise is a valuable and scarce asset.  But prospective franchisees should expect to pay up and may have to wait a while before any of the franchises are re-sold.

2.  Five Guys is not doing a good job at engaging their customers through social media.  Visit their Facebook page and the only thing you’ll see on the wall are announcements when a new restaurant has opened.  It’s a pity because Five Guys has so many Facebook fans and they could do be doing so much better at communicating with their followers through social networking.

Previous post: The Story Behind the Rebranding of MyDestinationInfo.com and Their New Hotel Booking Engine