Saturday is the slowest day of the week in terms of traffic for my blog, so I want to avoid posting any new reviews or articles on this day.  Every franchise company I feature deserves the maximum possible exposure. To take advantage of this quiet time, my Saturday posts from now on will be devoted to a behind-the-scenes look into running a franchise blog, with special emphasis on sharing what I’ve learned along the way, particularly about social media and internet marketing.

Facebook versus Twitter: Facebook has been an excellent source of traffic for The Franchise Chatter Blog.  More often than not, when I do an interview with a franchise executive or franchisee, the company promotes it on their Facebook Fan Page and on Twitter.  Any mention on Facebook results in an immediate and significant boost in traffic that lasts for about 48 hours.  In contrast, the traffic generated by a Tweet is merely a trickle, at best.

But Twitter is great for making connections.  Within a few hours of setting up my Twitter account, Peter Taunton, CEO of Snap Fitness, became my 3rd follower.  And this connection led to my exclusive interview with him a few weeks later.

Reputation Management: Most franchise companies are not actively monitoring how their franchises are being discussed online.   Anytime Fitness is one of the exceptions because they have a great guy who serves as their Social Media Specialist.  Within days after posting my feature on the Top 3 Fitness Franchises, I received a very nice email from Andy G. thanking me for their inclusion in the article.   His reaching out to me has led to several of my most popular interviews to date.

More recently, I did a blog post linking to an article on Moe’s Southwest Grill, which I found on The Franchise Hound (another franchise blog).   The person handling Moe’s media relations found my blog through that article and we are now looking for ways to collaborate on future interviews.

In contrast, I’ve sent a few emails to a number of franchise companies that I’ve reviewed in the past to request an interview.  The most disappointing part is not receiving an email back, even if it’s just to say that they are not interested at this time.   Some franchise companies have yet to fully grasp the power of social media.  Or maybe they are just not comfortable revealing too much.  Either way, that can’t be a good thing. 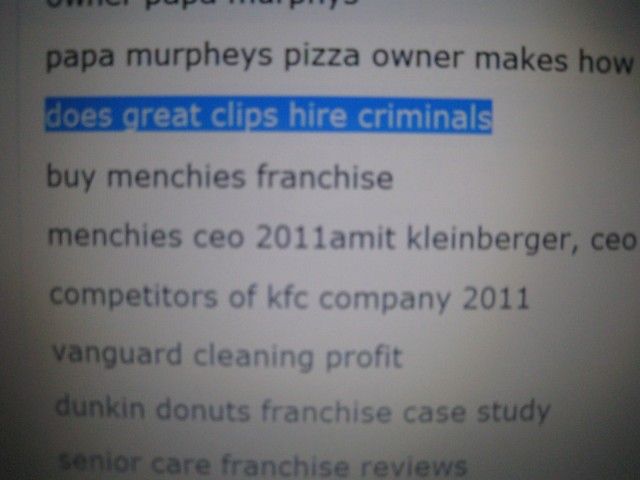 “does great clips hire criminals”:  I love studying my blog statistics on WordPress to see how people are finding my blog.  Right now, I think it’s split pretty evenly between referrals from search engines and social media (Facebook, Twitter, emails).  My blog is not yet ranked highly for the juicy search terms like “franchise” or “franchising” or even more specific terms like “low cost franchises.”

Just today, someone found my site through the keywords “does great clips hire criminals” and I still don’t understand how this happened!  When I checked Google, my website does not appear anywhere close to the first few pages of search results.  And I don’t even use the word “criminal” anywhere on my post.  So this remains a big mystery to me!

Google Adsense: I’ve been experimenting a lot with my Google Adsense placement in an attempt to maximize the number of legitimate clicks from visitors.  My blog used to have the maximum number of Adsense units allowed, which is 3.  Each Adsense unit can either have a single display image or 4 text links.

At first, having 3 Adsense units was working just fine.  But in the last 10 days or so, I noticed that my revenues per click had plummeted to maybe half (or less) than what I used to get when I first started.    I suspected that the advertisers on the 3rd Adsense unit were bidding very little per click.  When I reduced the number of Adsense units to 2, my revenues per click jumped right back up, with no noticeable reduction in the number of clicks.  So this is one case where more isn’t necessarily better.

My End-of-Year Flagship Project: By the end of this year, I want to launch a flagship project that will come to define the Franchise Chatter brand.  I’m making this announcement now to motivate me to follow through with my plans.  The initiative will revolve around franchises, social media, and best practices, and should come out before Entrepreneur Magazine releases their annual Franchise 500. Wish me luck.

Next post: What You Need to Know About the Edible Arrangements Franchise Opportunity