(Ambrosio’s note:  I’m so excited to share with you this very personal and revealing interview with Anytime Fitness franchisee Colleen Braun, where she so generously shares her franchise journey with us.  Anyone who has ever thought of  investing in a franchise will no doubt be inspired by her story.  Thank you very much, Colleen!

We have more franchisee interviews coming.  Any other franchise companies or franchisees who wish to share their story can simply contact me and we can arrange for an interview.)

1.  What was your professional background prior to becoming a franchisee of Anytime Fitness?

I was in nursing for over 20 years.  I was doing admissions and discharges at this corporate owned facility.  On my 15th year, I knew I wanted a new path in life.  However, before I knew it, I was celebrating my 20th year.  On the day I handed in my resignation, I had no plan — just six weeks of vacation.

I also filmed for 22 years for my own little company called Memory Makers where we filmed weddings, school events, depositions, trade shows and so on.  I am also a licensed real estate agent and a licensed auctioneer.

2.  What made you decide to become a franchisee of  Anytime Fitness?

I quit my job with no plan — none whatsoever!  I goofed off for six weeks and people were high fiving me because I had the courage to quit.  Only problem was I had no plan.  So after the six weeks were up, there was a reality slap of “what are you going to do now?”


I must have been surfing the net and tapped onto the Anytime Fitness site even though I do not remember doing that!  But one day, a call came through to my home and back in those days I had a lighted caller ID globe and the words “Anytime Fitness” ran around in a circle in this blue illuminated globe.  My first reaction was “I’m not going to answer that!”  Then something inside said, “Go ahead, pick it up!”

So I did and on the other end was this wonderful voice who had words of encouragement of having the lifestyle I always dreamed of.  There was no pressure but a very kind and level headed conversation.  We talked more about my passion of giving to others than we did about making boat loads of money.  We talked about freedom of time and freedom to be my own boss.

There were challenges along the way, but this man never gave up on me and his name is Jeff Thames.  I remember there was a debate with the bank who was supplying the SBA loan and the big question was why not do this all by myself versus a franchise.  So I asked Jeff that same question and I still remember him saying to me, “Well, Colleen, how many clubs have you opened?  We have opened hundreds of clubs! We’ve made the mistakes!” (That was in 2005. Now, they have over a thousand clubs up and running.)

It was a pinnacle moment in my life. And to top it off, during the time I was opening my first club, I went back to school for Sales and Marketing and graduated top of my class!

3.  What is a typical day like in your life as a franchisee?

Well I have a lot of flexibility as I have great managers who run my clubs as if they own them.  Their names are Sara Kohlhof (who runs the Springfield club) and Teri Kratz (who runs the Madelia club).

I visit each location once a week and I personally handle a lot of the paperwork from my home office.  No day is ever the same and I spend a lot of time marketing the clubs with commercials on the radio, print ads, and billboards.

I have the flexibility to enjoy a beautiful day on the golf course or attend a show of my daughter Stacy K as she sings professionally in Minneapolis, MN.  It’s great to not have that corporate world conflict I used to have to deal with.  We all get along so well and it’s a fun place to go to!

4.  Can you name a few specific things that you’ve done for your business that have produced the greatest results?

Billboards have worked really well for us as they are not as expensive as they are in other parts of the country.  We have a lot of fun with radio ads as I have a daughter who has created an Anytime jingle that we use locally.

A defining moment came when my current manager for the Madelia club, Teri Kratz, walked into my club in Springfield as an overweight, depressed farmer’s wife and mother of 4 children.  I remember it turned into a door closer as her eyes filled with tears as she shared her sorrows of what this weight did to her life.

She transformed her body in 127 days and lost over 70 pounds.   And the good news is she has kept it off.  At her heaviest, she weighed around 242 pounds and now she is about 130 pounds.  I was so impressed I asked her to become a trainer for me and we both won at the 2007 Anytime Fitness Conference in Utah — myself as Honorary Club Operator of the Year and Teri as Member Weight Loss Success Story.  We both were so touched.

And Teri’s life has so evolved, she became the face of the Real Stories Campaign for Anytime Fitness worldwide and became my manager in Springfield and then moved to my second club in Madelia.  Then last month, she ended up on the Today Show with Kathy Lee & Hoda and I was there to see it all in New York!  Thanks to Mark Daly, we had a splendid time for sure!

5.  Can you share the highest and lowest points of your franchise journey so far, and what lessons have you learned from them?

In 2005, nobody had really heard about Anytime Fitness in the outer rural areas of Minnesota.  The challenge was to get financing to buy into the idea and I was rejected, not once, not twice but three times before the whole package got pulled together.

Financially, I should never have been able to have my own club — much less two of them — since I was a single parent of three children.  However, the team at Anytime Fitness (Jeff Thames, Chuck Runyon, Mark Daly, Eric Keller, Tom Gillis, and many more!) supported me and instead of saying, “No!,” they said “Why Not?”

I did a lot of crying before boards who kept rejecting me.  I used the Southern Minnesota Initiative Fund, the local Economic Development Association in Springfield, and Farmers & Merchants Bank in Springfield.  I had to campaign the Chamber of Commerce and the local hospital and physicians.  The beauty was they all finally got behind me as they could see my vision for what a 24/7 health club like Anytime Fitness could do for our small community.

The high points:    Springfield was named a Fit City — an honour given by then Governor Pawlenty — and I was given the key to the City of Springfield.   And the greatest tribute for me was being named the Honorary Club Operator of the Year out of some 400 clubs back in the day.

The lesson learned here is do not give up!  You can achieve many things if you do not quit.  If you do not quit you cannot fail! (It helps having the great support of Anytime Fitness too!) 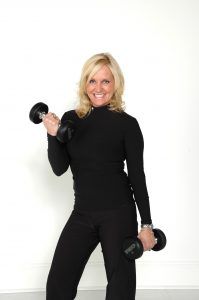 6.   If you were to speak with a prospective franchisee about the profit potential of an Anytime Fitness franchise, what would you say?

I would say if you want financial freedom and above all time (as in my opinion, time is money), by all means do it!  It is such a rewarding career to see lives transformed on a regular basis and it’s because, as franchisees, we offer a fabulous place to work out in and we care!

I was a simple small town girl raised on a farm when I was young.  I rarely got to experience the outside world.  Since joining Anytime Fitness, I’ve gotten to travel to Utah, Atlanta, Big Sky, Montana, Wisconsin and last month to New York!  This fall it sounds like I will be going to Washington D.C.!

I still am a caregiver but on the front end of health care and I love what I do!  How many people can say they love their work?

Check out the music of Stacy K, Colleen’s daughter, at www.someoneelseblamer.com and on myspace (themixtaperevue, stacyksongs, and pogmatone).  Book her for your next event or party!